SV Laurin in The Netherlands

Saturday looked like being possibly quite windy so we decided to move away from Katakolon today rather than be stuck here until Tuesday. The only sensible option was Zakynthos Town despite it not being somewhere we were over keen to visit. We had heard lots of reports of it being not very welcoming to yachts, dirty, with one boat seeing a dead cat in the water! We all really wanted to visit shipwreck bay on the west coast of Zakynthos and so Keri in the south would have been a good option for tonight, however shipwreck bay is a fair weather anchorage and with no real likelihood of calm weather happening any time soon Keri looked like 15 extra miles for no real benefit. So, Zakynthos Town it was. We had phoned up to pre book a berth as we were concerned about arriving late and having no real alternative safe haven. It was a long sail and we eventually arrived about 5pm, called the guy on the VHF and were directed to a somewhat suspect alongside berth. It was extremely shallow, the quay side was crumbling away and there were holes where a previous cleat had clearly ripped out. In addition there were some random bits of metal sticking out of the side waiting to puncture either our fenders or our boat! We were feeling very tired and a little uneasy when the guy turned up to take our money. He announced it was 10 Euros registration fee plus 15 euros per night. When I questioned this (I had heard 10 Euros per night) he said it was an additional 5 Euros for the alongside berth. At this point Patrick who was already spitting dust about the berth really lost the plot, explaining to the guy that in no way shape or form was this berth worth any extra money. We were given the option to move to a stern to berth and after rejecting the first one they offered we moved to the Town Quay which looked like it might be noisy and busy but certainly safer than the other options we were given. It took about 6 attempts to get  Laurin to go backwards into the berth in the building wind ,(she had a long fin keel, massive prop kick and a lot of windage.... and no bow thruster), but eventually we were in!

Maria then messaged me to say that they were going to watch the football then out for a meal and would we like to join them. In the end our showers in the free but very public and somewhat dirty showers took long enough for us to miss the football but we managed to catch up for a lovely meal out thanks to another tripadviser "Cheap Eats" recommendation. All 9 of us ate and drank for less than 60 euros including a litre of rose at Stathmos Taverna.

We then walked to the town square where the kids could run and play (and eat ice cream!)

Maria and I took off in the morning to hunt out groceries, which we were happy to find in a good priced "My Market" less than 100m from Laurin. I took advantage of the prices and proximity to give Patrick a call to take a first "Granny Trolley Load" of beer, drinks, toilet roll etc back to the boat while I continued shopping for perishables. We then took some time to tidy up the boat before Pierre took AJ, Marcus and Lucia to watch the football, Maria took Esmé and Jago to the beach, and Patrick and I enjoyed some time to ourselves and prepared dinner for the whole gang. We ate together then Maria and Pierre took a little child free time together whilst the kids watched a movie on Laurin and we tidied up.

In the morning we went for a walk to explore a little. First stopping at a playground to let the kids burn off some energy while the adults took some time to sit and chat. 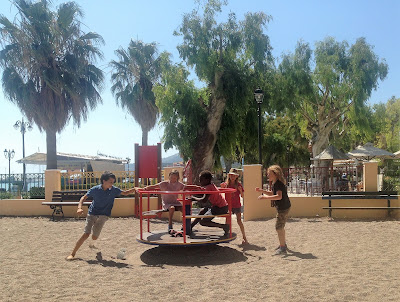 Next up was visiting a Greek Orthodox church where we talked about how it differed in appearance to the many Roman Catholic churches we had visited so far on our travels. The kids always like to light candles to remember Great Granny and Neo the dog so they did this before we headed out into the sun again. 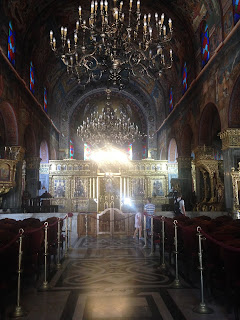 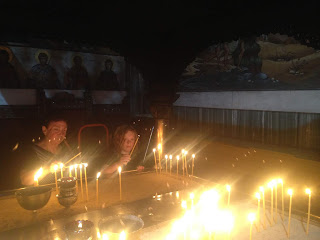 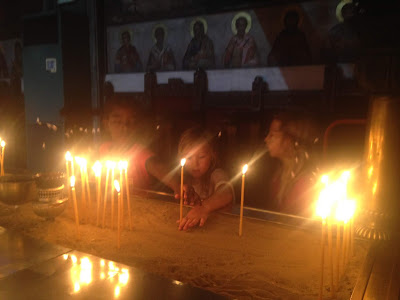 Next up was a quick lunch before packing swim things to visit a splash park... a bit of an indulgence with no real educational value but great fun and something I suspect we won't get the opportunity to do once back in our "normal life".

The Dads enjoyed some kid free time on the boats (although in Patricks case this was spent tidying yet again). Meanwhile the Mums floated, swam and slid with the kids. We chose to visit after 2:30 (actually being let in at 2:15) to save 5 Euros per person, however the 3 hours we had in the park were more than enough... we were exhausted afterwards. 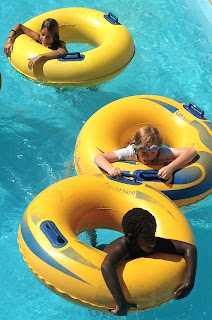 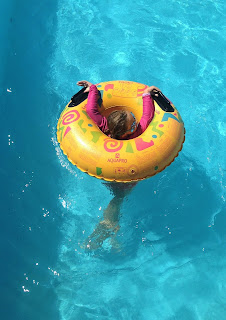 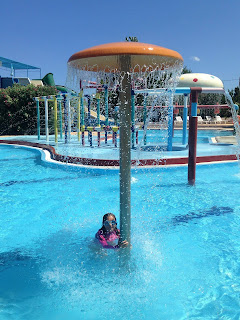 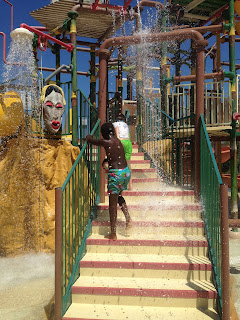 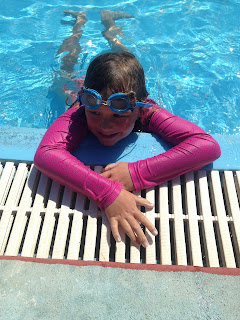 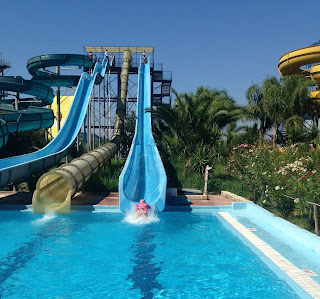 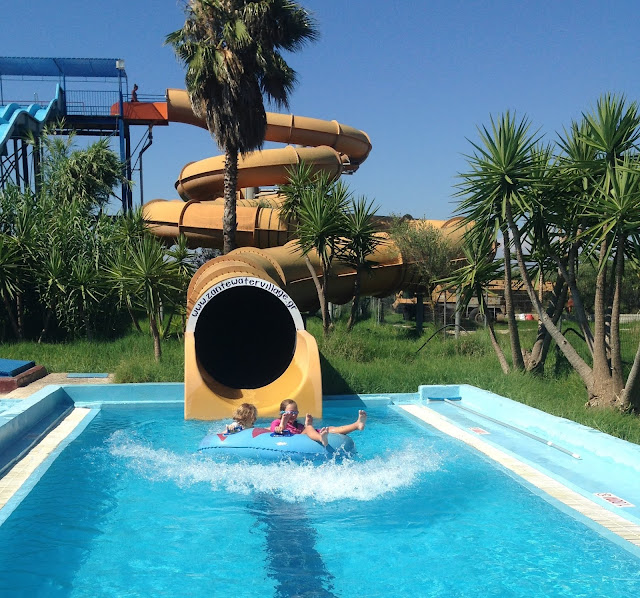 I was exhausted afterwards and rather than cook the chicken satay planned we opted to raid the bilges for tinned ravioli.... still got some left!

Maria and Pierre were keen to move on the next day but I was less than keen on the 5am start I really wanted to make the 35 mile distance to our next stop before the winds increased significantly so we agreed to make the decision in the morning.

I really didn't feel the love for the 5am start so we decided to stay put, slightly questioning our decision when we received a message from Maria saying it was really calm... not even enough wind for them to sail. Regardless I was quite pleased to have a day to concentrate on boatschool as Soledad have finished for the summer unlike us and we have (intentionally) been a bit lax about it over the past week as an experiment that I don't think particularly worked for us. AJ especially needs a bit of structure and so I was glad to get back to our "300 points per week" school requirement where I write out a list of possible activities with corresponding points scores and the kids choose which they want to do each day in order to earn their electronics time.

In the afternoon I took Esmé out on a shopping trip. AJ often ends up having more one to one time with me during schooling as Esmé is very independent and so every once in a while I take Esmé out alone so that we can connect. We sauntered around the town, stopping to pick up a few bits and pieces including new (fake) crocs for her and then finished at the hotel opposite Laurin for a drink in the hope that we could get their wifi code and access it from Laurin. Esmé had an amazing slushi which seemed a little expensive at 4 Euros until I realised it was made with real fruit.

After our chicken satay for dinner we all went for a walk for ice cream, enjoying watching girls doing rhythmic gymnastics in the square, AJ playing football with some local boys and generally watching the world go by. A lovely end to what was to be our last night in Zakynthos Town, moored in the posh end of town! 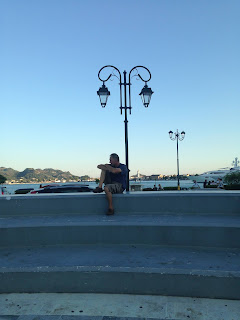 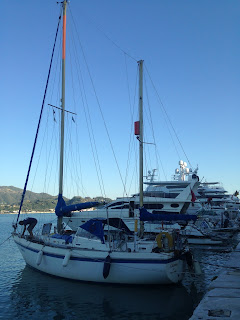 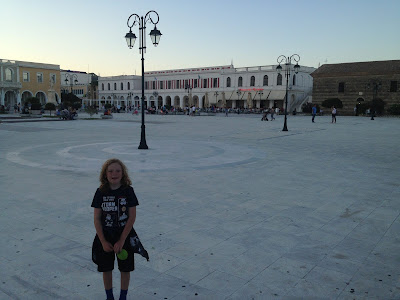 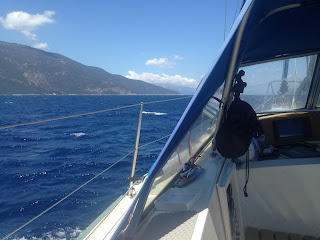 A 5am start really didn't have me feeling any love for the day but I felt compelled not to put off leaving another day so we slowly got ready and left at around 6am. It was quite breezy but according to the forecast the wind was supposed to drop by about 9am. We were still unsure if we would head east over to the mainland or north to Cephalonia. As the forecast for the rest of the week was still unstable, and we were unable to make our preferred mainland destination on one tack, we decided to just head for Cephalonia and motor into the wind and chop. It was pretty uncomfortable and I definitely didn't want to be down below for too long. The wind dropped slightly at 9am and we were hopeful that the swell would follow, however any drop was negligible until we rounded the southern tip of Cephalonia. We considered other stops in the southern part of Cephalonia but none were ideal so we pushed on to Efumia, glad to enter the bay and anchor in our favourite spot next to the rocks.

We then spent an interesting couple of hours watching more and more boats trying to squeeze into the anchorage, having to yell at a couple who were clutching at straws trying to find a spot and anchoring way too close to both us and the rocks. By this point I was feeling the effects of way too much sun despite wearing my floppy hat all afternoon (something we will have to be extra mindful of during our long, multi day passages in August). Not feeling like dinner I hit my bunk early leaving the kids and Patrick to cook... sounded like they did a fantastic job!